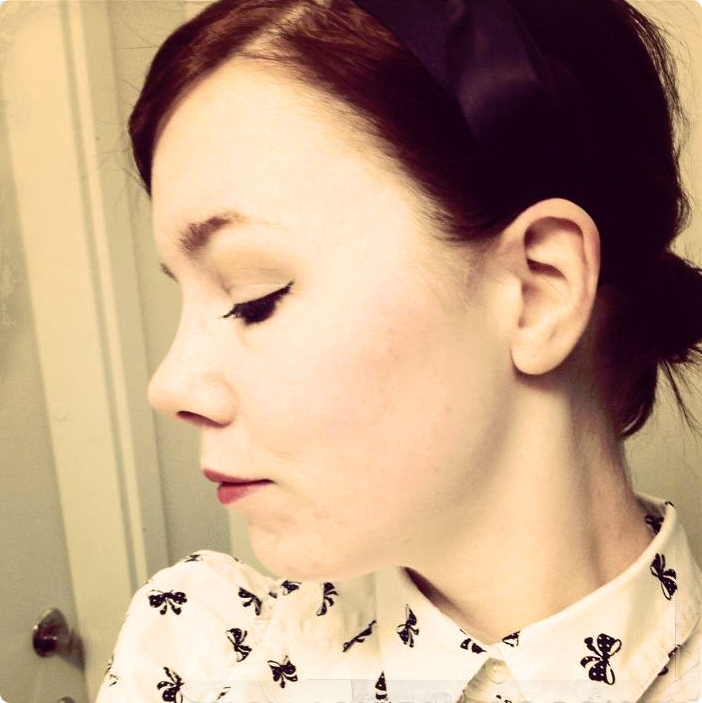 Feeling pretty today. To be honest I’ve been feeling pretty since I dyed my hair on friday. I like it better when it’s red, and as long as the eyebrows match it looks twice as good imo. I keep stopping in front of mirrors to stare at myself for a while, and then I pull up the cell phone to snap a picture but it doesn’t look at all like what I see in the mirror. The camera hates me, it’s a well-known fact. Yes, I can look really good on pictures, but the good ones are 1 in 20 (if I’m lucky) and then it doesn’t even look like *me*.

I’ve always felt like the ugly duckling. I had some ”friends” who were very good at telling me about all my faults and flaws when I was younger (I’ve mentioned this before) and it doesn’t take too long before you start thinking that they must be right. I didn’t start getting attention from boys until the summer when I was sixteen and hung out with a gang of 7 guys who were visiting Medeltidsveckan. I felt like a confused kid in a candy store, all these guys giving me compliments and trying to get my attention, what’s up with that? I was paranoid and suspicious, of course. I was pretty sure they were only joking to hurt me. To this day I don’t know for sure, but with what I’ve learned from life so far I think that they actually found me pretty. It was that week, when I was sixteen and shy like a doe and dressed like a fool that I got my first kiss. I fell in love, of course. I was so happy for the attention and I mistook my feelings for love. In retrospect I understand that I was just fooling myself, but yeah. Anyway, it was nice being kissed :) I like that. Soft lips and a curious tongue :3

When I was 17, 18, 19 I had a lot of fanboys. I jokingly called them my harem, because it sounded cool and I was desperate to be cool. I never even hung out with them, we just chatted and they told me I was pretty. I was clinging onto those words of praise because they were so important to me. After having spent all my previous school years being the ugly ducking, the odd one out, the weird nerd – I was finally being accepted, adored and appreciated by my surroundings. Sure, I was still the weird one. People in school thought I was a dork or just too strange for them. Me… I was just trying to find myself. I was outspoke and enjoyed being weird, even though I still really just wanted to fit in. Not having any friends for 6 years will do that to a girl, believe me.

And then I got a boyfriend. I will not discuss that any further here, that was both a good and bad period in my life and I will leave it be (for now, perhaps I’ll talk about it in the future), but it was another step in me becoming a more self confident person. Not only did boys think I was pretty, one of them even fell in love with me! How nice is that?

Anyway. This is a longer story than I intended, haha. After breaking up with him I fell into a black pit, sort of, and even though I still had fanboys and some creeps trying to catch my attention I started to feel less pretty. Then I met my second boyfriend and felt all better again and blah blah blah.

Now I’ve been single for 1,5 years. It started off very bad, and I felt very miserable over the break up. And then last summer I started feeling on top of the situation. I still do. And now I look in the mirror and I say to myself: Damn girl, you hot!
…and then I pull up the cell phone to save the moment and to have something to look back to when I’m feeling miserable again, and my camera phone tells me that I look like crap. Haha ^^ Fuck you, camera!

I am not really a vain or shallow person. I appreciate personality over looks. But that really doesn’t mean that beauty is irrelevant to me, and that I don’t enjoy feeling like a goddamn doll whenever I look at myself. Days like today are the days I want to be able to look back to when I’m feeling less pretty.

So. Um. Wall of text, and yet again I think I lost the red thread somewhere half through. Long story short: I’ve always considered myself unpretty, then I realized I’m fucking hawt but I can’t capture it on a picture to show anyone. FML. :P Oh, and I like kissing. Mrrr :3